Completed in 1993, Turquoise Island remains a distinctive focal point of Notting Hill, sited on a reclaimed paving area at the junction of Westbourne Grove and Colville Road, which give both the site and the occupying building its distinctive triangular layout.
The Architects - CZWG - were commissioned to design the building by local residents, which superseded the Local Authority's proposal. A multi-functional piece of architecture, Turquoise Island incorporates male, female and disabled toilets, attendant's quarters, stores and a clock into the design, and is also home to popular and award-winning Florist's 'Wild at Heart', creating an interesting juxtaposition of form and function.
The award-winning building is situated within the Pembridge Conservation Area and was a joint venture between the architects and the Pembridge Association.

Martin Bormann, Private Secretary to Adolf Hitler and one of the most prominent Nazi Leader's found guilty in absentia in 1946 was rumoured to have been in hiding in London in the 1950's & 60's ... disguised as a Toilet Attendant in Wesbourne Grove (though a a skeleton being identified 'with near certainty' as his was found in West Berlin in 1973).

Turquoise Island is a paradox. We found it ironic that two such contrasting functions are associated with the same very small building. Nikki Tibbles' flowers are famous in London and beyond and are also sold in Pimlico, Liberty (on Great Marlborough Road) and even at Harrods. Eighteen years after Nikki beat 70 other applicants to lease the booth at Turquoise Island, the building has achieved listed status. 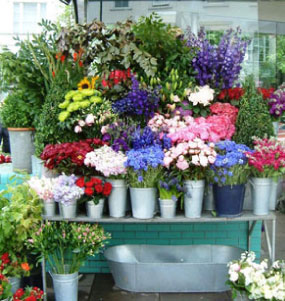 On our way to the site for the first time we had to walk through the famous Portobello Market, the heart of west London. The market was lively; people buying and selling. Approaching the site, we found that it was a stark contrast to Portobello Road. Despite being the centre point of a largely retail based environment, the site was relatively quiet.

We are conscious of how our initial understanding of the building evolved the more time we spend there investigating it, drawing and re-drawing it. Note how the more detailed elevations correspond to the initial sketched ones. There was a revolution of thinking every time we visited the site.

Turquoise 'Island’ is a really fitting name – it’s separated from the rest of the street by three roads. It seems to cut into its surroundings, almost as though the roads have parted to make way for it, as pedestrians do - giving it a certain sense of movement and drive - despite being a static object in the environment. It is as though it stopped here, alien in comparison to the reserved vernacular of Notting Hill.

The language of energy and movement is also more obviously referenced by the dancing humanoid graphics either side of each entrance to the restroom facilities -  reference the famous Notting Hill Carnival. And the building itself - with its unique colour and distinctive form - evokes a giant Carnival Float, while the frivolous canopy could reference the exotic costumes and headdresses of the parading crowds.

The distinction between inside and outside is also blurred during times of operation -  the restroom doors remain open while the Florist’s only shelter from the elements is a glass booth from which flowers and trees pour out into the public space either side of the keel-like eastern elevation. This blurs the boundaries between public and private space.


Specially commissioned, the turquoise bricks are the most prominent feature of the building, and of course what give it its name. The glazed bricks are waterproof and easy to clean which is clever considering the Notting Hill Carnival is on every year and also being a florist where a lot of water is used the material is fitting.

It’s a low maintenance material which is good considering it’s a public toilet… not many people would want to spend a long time cleaning/ maintaining it on that half. The bricks give a smooth modern finish to the building, which subtly reflects its environment. To make these glazed bricks salt water has been spread over clay bricks and put in the kiln at 2000°f. The bricks are 215 x 102 x65mm.


In contrast to the feeling of mass conveyed by the bricks, the Florist's glass booth on the eastern side is transparent and light. It perfectly translates the idea of a permeable space into physical being. The street pours in and the flowers pour out.  It's a hub for information, transactions and shelter.

Translucent poly-carbonate panels are arranged in a V-section (within aluminium framework) sheltering not only the interior, but also creating a canopy on the exterior that - due to its placement over the triangular floor-plan - creates a false sense of perspective, making the viewer question the building's actual configuration. (As in Ashley's initial sketched elevations, it's possible to see a discrepancy in the orientation of the rear 'monolith' type end).


The construction industry is the second largest consumer of poly-carbonate. It's extremely durable,  lightweight and can be made with numerous levels of opacity. Due to its lengthy lifespan, it is also economically and ecologically sustainable.

The end of the canopy that projects over the eastern elevation resembles a fan or headdress, which may once again reference the Notting Hill Carnival. This, along with the translucency, allows for a very light appearing shelter - a start contrast to the heavy brick 'plinth' that it seems to float above.


The framework in which the poly-carbonate panels are fixed is aluminium - being (like the polycarbonate) lightweight and durable, the aluminium is an ideal material for roof construction. It's malleable, enabling simple manufacturing and has a great longevity due to it not oxidising and therefore not rusting, needing very little maintenance. It's also very environmentally friendly, being 100% recyclable.

The Island's structure is very distinctive. The elements that define its body are bold, interlocking (in the sense of overlapping forms) robust and geometric, bringing to mind the Cubist paintings of Picasso and Gris.


The structure is shell like, it’s all one level so there’s no heavy supports needed meaning the design and materials used were very free. Its small connected layout is intimate but also relates inside and outside though the glass being able to see all the way through to the other side of the street.


The glazed brick structure has its own life with the light reflecting off of it. The structure was chosen to create atmosphere in the lively area, and effects how we perceive the space by the way it follows the street.


The building's functions mean that very few amenities are required (due to a large percentage of it being empty for most of the time), and therefore the envelope need only be devised to meet more basic criterion than a more regularly occupied space.
Shelter from the elements, air and vapour control and the support of water and drainage systems are the main concerns of the building's 'skeletal' enclosure.

The building's outer skin consists of concrete foundations, a 'sandwich-like' wall (consisting of concrete block work internally, a cavity for damp-proofing and turquoise glazed bricks externally), steel and aluminium louvres (addressing ventilation requirements) and the poly-carbonate roof panelling, all of which were mentioned in the materials section.

The glazed bricks are obviously impermeable to water, but whilst meeting the practical needs of shelter and construction, they also positively address another fundamental issue regarding the building enclosure - that is - the finish. The bricks are also aesthetically pleasing, suggesting that the 'ambition to realisation' process was a smooth and successful one.


Ventilation to both the toilet facilities and the Florist's booth is provided via steel and aluminium louvres. When in operation, the building is generally quite permeable (in terms of light and air); all doors are swung open, making for a constantly fresh and (relatively) clean air circulation.

How the building supports water systems is purely speculative given that the network is hidden from view. However, it's likely that much of the drainage systems are concealed within the central 'spine' of the building (ie: between the male & female toilets and within the probable void beneath the bricks in the Florist's booth - see sketch below).


The immediate environment encompassing Turquoise Island is a mix of retail and residential accommodation. The Island's distinction in the area make it a key reference point; a meeting point. It's flanked by parking bays and is also home to a Barclays bike hire station.


The most prominent alteration to the building's environment at a given time is the passing of the Notting Hill Carnival Parade. Attracting up to 2 million people at its peak, the Notting Hill Carnival is the second biggest street festival in the World after the Rio Carnival in Brazil. It's participants are mainly British Trinidadians and Tobagonians, and have been leading the procession since 1964. The procession passes Westbourne Grove and Turquoise Island every Summer, and has its roots in a bid for racial tolerance, given the poor state of race relations and opposition to immigration during the 50's and 60's.